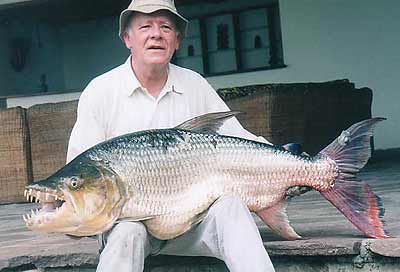 Check out our Astoria Fishing Charters and Washington Halibut Charters

The ‘Tiger Fish’ is the name generally used to refer to a variety of fish species of the genus Hydrocynus. Native to Africa, the Tiger Fish is located in scores of rivers and lakes throughout the continent.

Although they can grow to quite large sizes, the African Tiger Fish can be seen as the equivalent to the South American Piranha.

There are two major species of the African Tigerfish, mostly common in the South African sub-region.  The Hydrocynus goliath, commonly referred to as the Goliath Tiger Fish, is the largest in the family. The Goliath Tiger can grow to more than 110 pounds, and is rampant in Lake Tanganyika and the Congo River.

While most Tigerfish species are not known to be dangerous to humans, the Goliath Tigerfish is a scary exception. Citing recorded instances in the Congo River where unsuspecting swimmers have been preyed upon, it is the only African freshwater fish that is actually known to attack humans.

The second largest variety of Tigerfish, the Hydrocynus vittatus is a fierce predator characterized by a long slender shape and a forked caudal fin. Although its scales can be appropriately described as large, iridescent and silvery; sometimes they appear to have a golden cast.

This Tiger Fish has a colorful appearance ranging from light to dark shades making this species fascinating to look at. However, fish that live over sandy bottoms seem to have a much lighter appearance.

Distinguished by large and sharp protruding teeth, the Tiger Fish’s jaw holds a series of replacement teeth, meant to take the place of any teeth that might be lost or so broken.

The major factor standing out in the distribution of the Tigerfish is water depth. Studies conducted along major river systems show that the Tiger is rarely seen near rivers’ headwaters or in small tributaries. Nevertheless, the fact that the tiger is an open water predator explains why it’s found near water surfaces in rivers. Among other victims of the Tiger’s predatory nature, the fish eagle is a primary prey along the Zambezi River and its major tributaries. 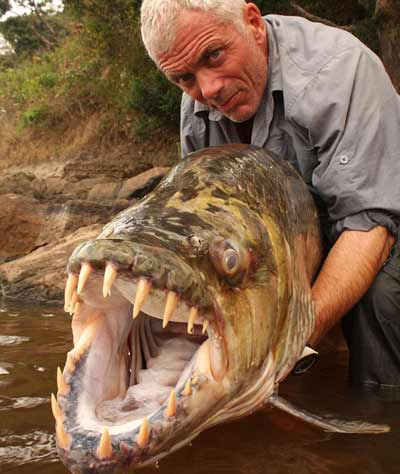 Compared to all the other species, the Tigerfish is probably the most prevalent type of fish in any river system around the South African region.

Tiger Fish will mostly be found on the surface layers of warm, well-oxygenated waters– conditions characteristic of major rivers and lakes.  With the exception of the largest fish, the others form dangerous roving schools of like sized fish and drift in the waters while hunting for whatever species of fish they can find. On the other hand, adult Tiger Fish move in schools of four or five fish. Still, they are just as dangerous as their younger brethren.
During its hunting expeditions, a Tiger Fish will attack a prey as big as itself, including animals that might be found unwarily standing along river banks. Surprisingly still, the tiger will turn to cannibalism when food is scarce.

The Tigerfish along the Zambezi river system breeds during summer when the adult fish migrate either upstream or downstream to locate suitable breeding grounds (usually shores and flooded riverbanks).  Once a suitable spawning ground has been identified, a single female can lay up to 780,000 ova, which consequently disperse onto floodplains and aquatic vegetation.
Predators from the word go, baby Tigerfish feed on zooplankton and later graduate to more complicated prey as they grow and learn.

Regarded by sports fishing aficionados as a wily and fierce creature, Tigerfish are probably the most exciting freshwater game fish in the inland waters of Africa.
To understand the logistics behind a successful Tiger fishing trip, metrics such as weather, distribution and behaviors of the fish at different times of the year are all things you must take into account. Hiring a professional guide is often a huge plus for shortening the learning curve for first time Tiger Fish anglers. 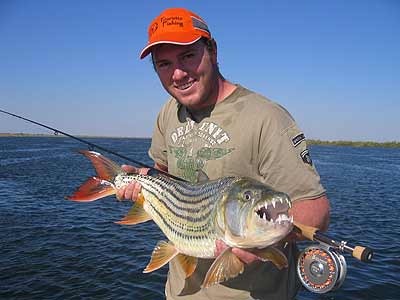 There are several sports fishing methods employed by anglers along major habitats:

In the South African region, where the Tigerfish are rampant along major rivers and large tributaries, fly fishing is a popular sports activity.

During the months of May, June and July; the upper areas of the Zambezi River is usually found to have a good number of professional and amateur anglers trying their skills at catching a Tiger Fish. This is a popular time because the river has already reached its highest levels and is bound to recede back to the main channel within no time. As thus, Tigerfish and other predatory species already found in the shallow floodplains have to find their way back to the main channel before dropping levels of water trap them on dry ground! Fly fishermen make use of this fact in their sports fishing activities along the Zambezi and other major river systems where seasonal flooding occurs.

When conditions do not favor other Tigerfishing approaches, trolling is a method often employed by many sports fishermen.

During the hot seasons, the water level is at its lowest, slowest, cleanes and warmest. At this time, the Tiger Fish are preyed upon by Water Eagles. Still, the water is moving slow and is not well oxygenated, making the Tigerfish less aggressive. Trolling gives the fisherman a chance to cover massive areas of water and not having to wade in the river in pursuit of these fish. 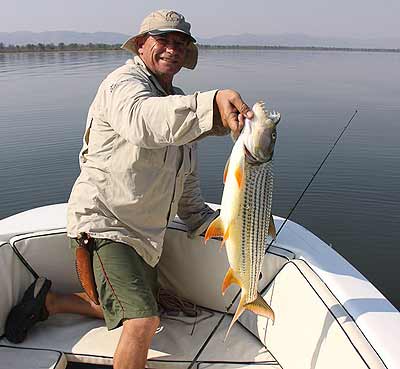 This is a Tigerfishing approach that is popular when the rains are pouring and thus the waters are dirty. During this time, the Tigerfish does not have a variety of options for food, and are locked to just one type of food source, the Bulldog Fish.

Drift fishing is a rather simple technique where the only hurdle is finding the tiger. Usually, a bait fish is rigged up using a double hook leader with one fixed and one movable.

This is a common and easily employed method for catching Tiger Fish, more often employed during the winter months.

Taking into consideration the predatory and ferocious nature of the Tigerfish, the use of lures is an ideal approach. This method is usually adopted during those times when river floodwaters are dropping thus leaving the Tiger Fish with a variety of food options such as schooling baitfish.

Due to its adaptability, spin fishing is the most preferred fishing technique. As it is, there’s no “one” way to catch the fish, just as there is no one specific style. The fisherman has to understand the changing habits of the fish in order to actually have a shot at it and this may mean employing multiple fishing techniques.

The kind of fishing equipment an angler chooses to use usually depends on the preferred fishing technique. For fly fishing, you’d need: rods, reels, fly-lines, leader-lines and flies.
On the other hand, for spinning, you’d need a line, a reel, a rod, lures and lures in multiple colors. This equipment also applies for trolling. 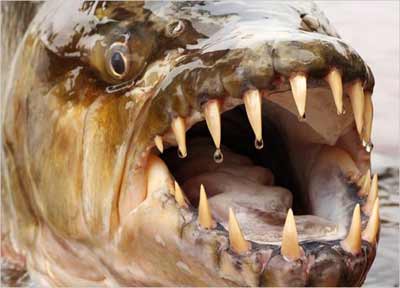 Well, whatever fishing approach is appropriate at the time of the year when you go out Tigerfishing, the equipment used should always be strong. As it is, Tiger Fish are strong, ferocious, and most definitely will come from the wrong side of the tracks with a bad attitude!

In most countries in the Southern Africa region, where Tigerfish are abundantly available in rivers and lakes, exclusive fishing companies have set up camp and established luxurious holiday facilities. Tanzania, Zambia, Zimbabwe, South Africa and Mozambique are just a few of the nations where the fishing industry is targeting the plentiful Tiger Fish. Very helpful at accommodating anglers, most of these companies offer their services in fishing packages.

Whenever you endeavor to embark on a sports fishing expedition in Africa, it is most advisable that you contract the services of an already established fishing company. The last thing you need to do is find yourself in a situation whereby you are not only surrounded by a school of Tiger Fish, but also crocodiles and hippos somewhere in the middle of the Zambezi!

Conservation Status of the Tiger Fish

The conservation of Tiger Fish in their African river habitats has of late been a priority among many maritime authorities. In Johannesburg, South Africa along the Komati River; Tiger Fish enjoy a high conservation status. Authorities consciously promote a catch and release fishery basis in order to ensure the future survival of Tiger Fish populations. 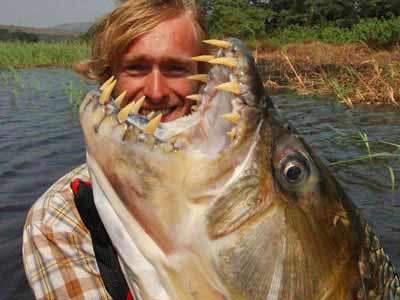 In most other African river and lake habitats, the major factors threatening Tigerfish and other fish species are: habitat degradation, overexploitation due to fishing activities, the effects of introduced species and environmental pollution. To curb these problems and ensure the survival of Tigerfish, fish conservation and management authorities focus on the co-ordination of a detailed action plan.

Among the key activities carried out to conserve Tiger Fish are: habitat control, controlled fishing methods, and pollution control are some of the most important.

All in all, Giant Tiger Fish are doing well and are not considered threatened or endangered in any way.


Giving 100% every day is the norm, because Buoy 10 or Estuary sturgeon or whatever season we happen to be in only comes around once a year, and in a few weeks it will be over. Let's be realistic ... every one of us has to have a last day on the water. We never know when that day will come, so we are absolutely going to make every day our best day.

We don't have gimmicks like "Fish Catch Guarantees". We won't tell you that we're catching 50 pound salmon every week, or tell you the fishing is red hot when it's not, or any of the other assorted things that guides tell prospective clients to get them on their boats. We're honest and we have integrity.

We're not the Dollar Store of fishing guides and we certainly aren't the Four Seasons. Our pricing is middle of the road. We believe in charging enough so that we can use high quality equipment, maintain this equipment, and not have to cut corners. We also believe that charging the average price will hopefully allow you to come back more often.

We really take fishing seriously, it's our passion and we certainly want to catch fish just as much as you do; that's why we go during the best times to the best locations and spend extra time, effort, and money to make your trip the best that it can be. We want you to have a successful trip so you come back fishing with us, we also want to be successful so we maintain our reputation as top notch guides.

We take a lot of pride in our fish catching ability and we do everything in our power to put fish in the box, while at the same time having fun, and keeping you safe.

Our approach to life and to fishing isn't standard, and it would certainly be "easier" for us if we weren't worried about these things, but the easy route and the safe bet aren't what we're after. We care about you and we care about your experience on our boats.

We believe our customers, peers and fellow fishermen know that we hold this philosophy close to our hearts and that they know we are out there every day living it. We believe it's important to not let them down.